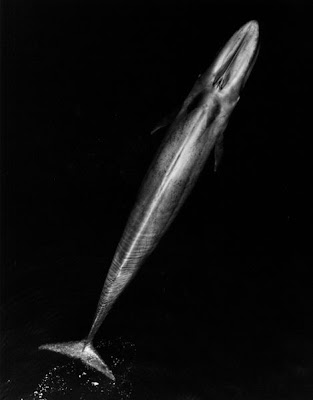 Why don't whales get cancer? Or rather, why don't they get a lot more cancer than people? Carl Zimmer has an interesting post on the subject:


Blue whales can weigh over a thousand times more than a human being. That’s a lot of extra cells, and as those cells grow and divide, there’s a small chance that each one will mutate. A mutation can be harmless, or it can be the first step towards cancer. As the descendants of a precancerous cell continue to divide, they run a risk of taking a further step towards a full-blown tumor. To some extent, cancer is a lottery, and a 100-foot blue whale has a lot more tickets than we do...

In a review in the journal Trends in Ecology and Evolution, Caulin and Maley took Calabrese and Shibata’s model and ramped it up to blue-whale scale. They found that the huge size of the animals means that by the age of fifty, about half of all blue whales should have colorectal cancer. By age 80, all of them should have it. It’s likely that blue whales should have far higher rates of other kinds of cancer, too.

The failure of the model means that blue whales must have some secrets for fighting cancer. “The mere existence of whales suggests that is possible to suppress cancer many-fold better than is done in humans,” Caulin and Maley write.

The mere existence of whales is the most glaring example of what biologists call Peto’s Paradox. There seems to be no correlation between body size and cancer rates among animal species. We run a thirty percent risk of getting cancer over our life time. So do mice, despite the fact that they’re 1000 times smaller than we are. All animals studied so far have cancer rates in that ballpark. (And yes, sharks do get cancer.)

The traditional view of cancer is that it's an aberration, a simple mistake in cell division.  But Peto's paradox would seem to lend support to the idea that cancer is a net positive for a species—or, stated differently, it's a side effect of a necessary feature of all successful species, namely the ability to adapt.  Adaptation results from mutation.  Too much mutation, and a species would be too susceptible to cancer, but too little and it would not be able to respond to changes in the environment.  The roughly equal cancer rates across species suggest that there is a kind of "happy medium" with respect to mutation and therefore cancer.

I'm not a biologist, and I understand the details of something like this must be phenomenally complicated.  But on a broad scale it seems plausible.  For more, see this study, which proposes a "cancer of cancer" scenario that may provide large animals their relative cancer protection.