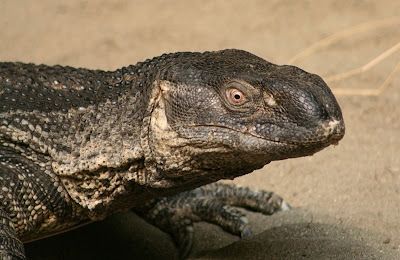 That is the Latin name for the white-throated monitor lizard, a large reptile native to southern Africa that can grow up to two meters long (see pictures of one at the Oakland Zoo here). In Setswana, it's called a "gopane." I saw one of these in my village yesterday on the way back from my run. Some kids from school found it in the riverbed and tortured it to death, stabbing out its eyes, cutting off its tail, and gutting it which finally killed it. It seemed to be a female as there were a bunch of round white things I can only imagine were eggs amongst the guts. I only arrived after it was already dead, but they described what had happened with much hilarity and re-enactment.

When I asked why they killed it, they said it was because it would eat their chickens and eggs, which is probably true, and because it sucks blood from people, which is completely ridiculous. It might bite a person, but not unless threatened. It seems roughly the same as killing wolves that eat livestock, though much more cruel, but I can remember young boys doing similar things when I was a kid. Farewell, unlucky creature. 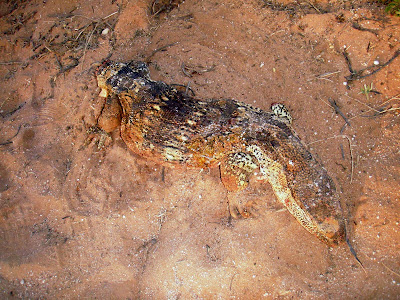