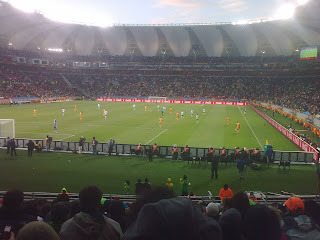 After seeing some elephants (they were quiet and mostly just seemed hungry), several jackals, a kudu, a bushbuck, and some cape buffalo at Addo, we drove into Port Elizabeth for the game.

Ivory Coast put up a strong defense and fought Portugal to a draw. This was the first major sporting event I have ever attended, and it was great fun. Drogba was put in at the end to rousing cheers.

After the game we drove to East London for the night. Today we're staying in Port St. John's. We had a quick swim in the ocean, which was suprisingly warm. Tonight we'll watch bafana bafana play Uruguay.