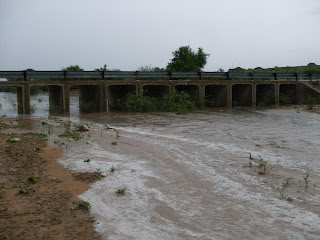 It was raining fiercely all afternoon here, sheeting soak-through-your-shirt kind of rain. An Afrikaner fellow is building a new classroom for the Grade Rs (kindergarten), and a big pile of pre-mixed concrete got thoroughly soaked. But the thing that most excited me--so much that I ran down to the bridge to get a look--was that the the river was running. I imagine it was going 75 cfs or so, not a savage flood or anything, but my heart was gladdened.

In fact, I was almost giddy. I watched a rusty 55-gallon drum float under the bridge whistling to myself like a fool. I've talked a lot about culture on this blog, often describing the relative lack of it in American society. But standing on that bridge, watching the thick, dirty, chocolate milk water feeding waves off half-submerged acacia bushes, I knew where I come from. River folk.